Rick Fields joined PRN Ambulance to serve as its General Manager, arriving with more than three decades of transportation and logistics expertise. An award-winning logistics executive, Rick has traveled the world as a leadership coach, offering training programs in Europe, Asia and the Americas. He also holds numerous certifications including The Institute for Motivational Living’s Certified Behavioral Consultant designation. Rick arrives at PRN after serving most recently as an Operations Director for Hellmann Worldwide Logistics and, prior to that, as Vice President Operations at Morrison Express Corporation. He has held numerous integral positions at both Hellmann and DHL, among other professional stops throughout his career.

Josh Parker serves as the Director of Training & Safety at PRN Ambulance after earning a promotion in October 2017 to his first directorial position with the company. Josh previously served as PRN's Training Manager, a position he assumed upon arriving at the company early in 2016. In his current role, Josh is responsible for risk and safety measures throughout PRN while also overseeing the Training Department. Ambulance and station safety, claim management, employee training and much more fall under Josh's guidance.

Pete Sturn is the Information Technology Director at PRN Ambulance. Pete began his emergency medical career in 1974 as a Medic and Clinical Specialist in the U.S. Army, later successfully acquiring both EMT and EMT-Paramedic certification in several states; he has been accredited as a Paramedic in several California counties. Pete eventually gained expertise in IT, and uses his experience as well as extensive knowledge of the Zoll Data products to the great benefit of PRN. He joined the company in early 2014.

Christine Miyahara is the Director Communications Center for PRN Ambulance, a company she joined in 2006. Arriving with no EMS industry experience, Christine has climbed the ranks to an integral leadership position for PRN. She began as a Call Taker while achieving EMD certification, which led to a Dispatcher role. Christine was then promoted to Communications Supervisor in 2008 before earning her subsequent promotion to Director Communications Center in October 2018, where she continues to strive for growth within her department as well as the company.

Jumpstart your journey into healthcare with a rewarding career as an EMS professional! 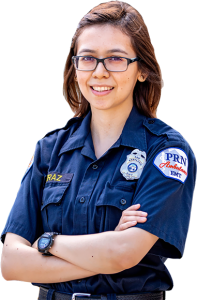